The South Beach diet, invented by dietitian Marie Almon and cardiologist Arthur Agatston, was named after an area in Miami. Now it is known as one of the most widely spread weight-loss eating plans.

Its authors designated it as an alternate to various low-fat diets popular in the 1980s. Doctor Agatston wanted to guard his patients against heart disease with the help of this program but later it turned out that his diet was effective for losing excessive weight.

The South Beach diet resembles some other eating plans, like the zone diet or the Atkins diet, but its authors point out that it is not a merely low-carbohydrate diet and people who follow it do not have to count calories or carbs.

The South Beach eating program is based on the so-called glycemic index1, ranking products by the glycemic load. The diet concentrates on a salutary balance between fats and carbohydrates. It replaces “bad” fats and carbs with “good” ones. When a dieter stops eating bad carbohydrates he improves his insulin resistance and metabolizes the food more effectively which results in losing weight. In general, if the glycemic index of a food is low, it is considered “good”.

The South Beach plan consists of three phases, including specific foods. Here is a brief description of all stages.

Phase 1 – This phase is the strictest one. It lasts for fourteen days. Dieters must exclude almost all carbohydrates from their meal. They are not allowed to eat bread, potatoes, rice, fruit, baked goods, pasta, alcohol, and sugar.

Phase 2 – Now one may begin to add foods prohibited during the first phase, like pasta, fruit, cereal, potato, rice, and bread. They should be eaten in moderation. The second part lasts until the goal weight is reached.

Phase 3 – This is the final stage which is more than just a phase. It is a healthy lifestyle.

The complete explanation of all three phases can be found in the book “The South Beach Diet”, by Arthur Agatston.

First of all, the South Beach diet really helps to lose excessive weight: from eight to thirteen pounds in two weeks during the first phase and one – two pounds per week on the phase 2.

If you follow the South Beach diet strictly according to the recommendations outlined in the official websites and books, this eating plan is safe for you. Some people experience minor problems when they start restricting carbs. They may have slight nausea, weakness, dizziness and dehydration.

What Foods Should Be Eaten and Avoided?

When you start following the South Beach diet, you will have to change the eating habits completely and for life. This program will help you to slim down and improve your health. Its efficiency has been proved scientifically but anyway you should consult your doctor before going on the diet.

During this phase of the South Beach diet, lasting for two weeks, you will get rid of food cravings and start losing weight. You will eliminate almost all carbs from the eating plan, including pasta, bread, rice, sugars, fruit, and many other foods. You are not allowed to drink alcohol or fruit juices.

Your diet will be based on lean protein, like skinless poultry, soy, beef, and seafood. You may also eat vegetables containing much fiber, low-fat dairy products, and various foods with unsaturated fats, such as nuts, avocadoes, or seeds.

This stage is much longer than the first one. You will start eating some foods that are banned on the phase one, like whole-wheat pasta, fruits, whole-grain bread, and brown rice. You will be also allowed to eat more vegetables. You will follow this phase until the goal weight is reached.

This phase of the South Beach diet is necessary for maintaining the results achieved in the previous phases. You will stay in it for life, eating almost all the products you like and following the principles that you have learned.

Here is a sample day’s menu for people following the South Beach diet.

Before you go on the diet, do not forget to consult your doctor and buy the official book “The South Beach Diet” or visit the diet’s website.

Kari from Fredericksburg, Virginia, weighed over 210 lb when she became a college student. She ate whatever she wanted and, of course, it showed. Kari decided to lose excessive weight when she realized that she did not want to go to university being obese. She even made some slight changes in her eating habits but they did not help Kari much.

It was her roommate who suggested Kari to go on the South Beach diet together. They started following the diet, doing physical exercises, eating healthy, and soon the first results were evident.

Finally, Kari has lost over 67 pounds and she says it has not been difficult for her. Now she is in the third phase and is not going to quit the South Beach diet because it has changed her for good. She assures everybody that this weight-loss program is the most efficient strategy and recommends it to all people who want to slim down.

Jacky has struggled with her excessive weight her entire life. She began to try various diets when she was a child but none of them worked for her. She lost several pounds but later gained them back. After she gave birth to her daughter, Jacky’s weight was almost 250 pounds. Her co-workers followed the South Beach diet and told Jacky about this program and she decided to go on it too.

It was a daunting task for Jacky to start the South Beach diet because she worked full-time and took care of the whole family, but she managed to do it and changed her previous eating habits.

By now, Jacky has lost over 150 pounds and went from size twenty to size eight. She advises everybody who wants to drop excessive pounds to try the South Beach diet and be persistent even if it is gets difficult to go on.

Jen is only five feet two inches in height and being so petite she had over 145 pounds. She exercised three – four times a week, but was still gaining weight. When Jen turned out to have prediabetes she realized that it was high time for her to change the lifestyle.

She learnt about this diet from a friend of hers and started following it. Jen began to eat healthy according to the recommendations for the first phase and exercised six times a week. When Jen lost twenty pounds she moved on to the second stage and felt much better.

Now she looks perfect and does not have prediabetes anymore. Jen says the South Beach diet never made her feel hungry and recommends it to everybody who is looking for an effective weight-loss diet. 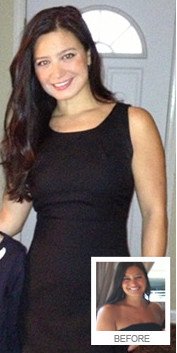 When Nell gain some excessive weight she decided to try the South Beach diet because this program do not make people count calories and figure out fat percentages in food. It took her only seven days to lose four pounds. After several months of following the diet Nell lost over sixteen pounds. Moreover, she got rid of slow heart rate, high blood pressure and irritable bowel syndrome. Now Nell is still on the phase two of the diet and her health is steadily improving.

When Pat was a college student she ate in a school cafeteria almost every day and that food was not healthy. She also got used to eating at night. Of course, she started gaining weight and the situation was getting worse during many years. When Pat went on the South Beach diet she adopted healthy eating habits and began to do physical exercises on a regular basis. By now, Pat has lost over 33 pounds. She is in the last phase of the diet and is going to follow it for life.